AMARILLO, TX – AQHA has received word of the death of AQHA Past President and American Quarter Horse Hall of Famer Dr. Glenn Blodgett. “Doc Blodgett” was a man of few words, with even fewer to waste. When it came to his profession, practice and passion, Dr. Blodgett deemed it best to keep it simple.

“None of us are getting out of this world alive,” said AQHA CEO Karl Stressman. “We need to leave our space better than we found it. Blodgett did that. We can only hope to do the same.”

Glenn Paul Blodgett grew up in Spearman, Texas, where his father farmed and ranched at the top of the Texas Panhandle. He married high school sweetheart Karen Wright (from the rival school in nearby Gruver), and both of the Blodgetts earned bachelor’s degrees at Oklahoma State University. Glenn went on to get his veterinary degree at Texas A&M University, and today is recognized as an outstanding alumnus by both universities. Together more than 50 years, Glenn and Karen have two daughters, Buffie Guynes and daughters Catherine, Rebecca and Clair; and Brandie Mustain, with husband Mike, son Maddox and daughter Myla.

Dr. Blodgett served on the board of the American Association of Equine Practitioners and was the Texas Veterinary Medical Association’s equine practitioner of the year. He had been with the Four Sixes Ranch at Guthrie, Texas since 1982, overseeing the breeding of legendary stallions Dash For Cash, Special Effort, Streakin Six, Mr Jess Perry, One Famous Eagle, Tanquery Gin and many more. Dr. Blodgett developed the Four Sixes into a mecca for broodmare owners and the horses the cowboys ride there into an AQHA Best Remuda. 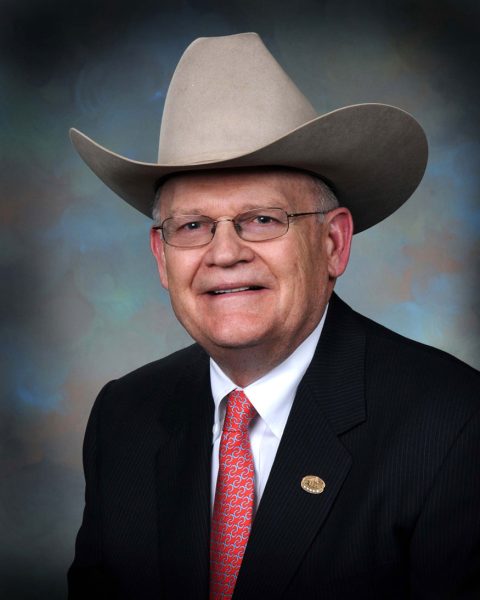 year. He was a trustee of the National Cutting Horse Association Foundation and was inducted into the Texas Cowboy Hall of Fame in 2019.

Dr. Blodgett devoted the same time and energy to AQHA. He became a director in 1991 and director-at-large in 2011, and served on the AQHA Hall of Fame Committee and the Stud Book and Registration Committee, which he chaired for three years. In 2011, he took home the AQHA Racing Council Special Recognition Award. Dr. Blodgett was elected to the AQHA Executive Committee in 2012 and in 2015 became the 65th person to serve as the Association’s president.

“From all standpoints–whether it’s health, nutrition or breeding–we want to do everything we can as an Association to help our members in every way we can,” Dr. Blodgett said.

He was inducted into the American Quarter Horse Hall of Fame in 2021.

“I know of no person more dedicated, compassionate, and concerned with the welfare of our horse than Dr. Glenn Blodgett,” said AQHA Past President Frank Merrill. “Glenn was an unapologetic servant to our horse and the industry that supports him. His knowledge and opinion has carried the day on many occasions and we will suffer greatly in his absence.”

The Blodgett family has designated several charities for memorials, including the Dr. Glenn Blodgett Equine Research Endowment at the American Quarter Horse Foundation.