WASHINGTON, D.C. – The Senate Agriculture Committee approved legislation on Wednesday that would require meatpackers to buy a portion of their slaughter cattle on the cash market — a step intended to ensure fair prices. Another bill will create a USDA special investigator to enforce fair-play rules in the meat industry where only four packers now control over 80% of the meat supply.

The Meat and Poultry Special Investigator Act of 2022, and the Cattle Price Discovery and Transparency Act of 2022 were both passed out of committee and prepared for floor action.

Senate Agriculture committee chairwoman Debbie Stabenow (D-MI) said, “These bills will make progress toward a more competitive, transparent, and fair supply chain that is better for American farmers and better able to keep food on all our tables.”

The House of Representatives passed a companion meat investigator bill, HR 7606, last week on a 221-204 roll call. The House Republicans who voted for the bill were Midwesterners — Don Bacon of Nebraska, Randy Feenstra of Iowa, Vicki Hartzler of Missouri, Ashley Hinson of Iowa, Dusty Johnson of South Dakota, Adam Kinzinger of Illinois and Marionnette Miller-Meeks of Iowa.

But most Republicans voted against it as “more cops for cows.” It was also opposed by the North American Meat Institute, National Cattlemen’s Beef Association, National Pork Producers Council, and the National Chicken Council.

“The U.S. cattle industry is home to one of the most complex set of markets in the world. Rather than embrace the freedom of that marketing system, Congress is instituting a one-size-fits-all policy that will hurt cattle producers’ livelihoods. Cattle markets are finally returning to normal after pandemic-fueled uncertainty, but these heavy-handed mandates will stifle innovation and limit marketing opportunities,” says NCBA Vice President of Government Affairs Ethan Lane. “Cattlemen and women deserve the freedom to market their cattle in whatever way they want.”

The Cattle Price Discovery and Transparency Act was sponsored by Deb Fischer (R-NE), Chuck Grassley, (R-IA), Jon Tester (D-MT) and Ron Wyden (D-OR). The cattle pricing measure now has 10 Republican co-sponsors including Mike Rounds (R-SD), according to Fischer’s office. That’s enough to clear the filibuster, should all 50 Democrats vote for the measure. 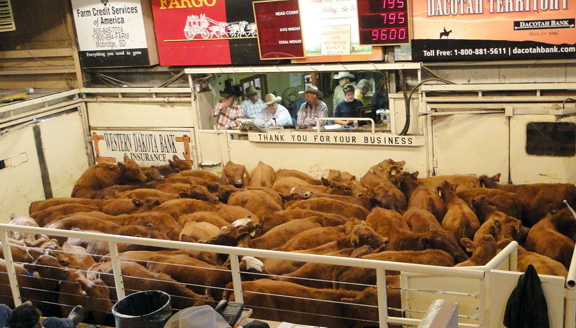 The legislation now coming before the full Senate would require meatpackers to buy a portion of their slaughter cattle on the cash market — a step intended to ensure fair prices. Photo Mobridge Livestock

The updated bill would:
*Require the Secretary of Agriculture to establish 5-7 regions encompassing the entire continental U.S. and then establish minimum levels of fed cattle purchases made through approved pricing mechanisms. Approved pricing mechanisms are fed cattle purchases made through negotiated cash, negotiated grid, at a stockyard, and through trading systems that multiple buyers and sellers regularly can make and accept bids.

*Establish a maximum penalty for covered packers of $90,000 for mandatory minimum violations. Covered packers are defined as those packers that during the immediately preceding five years have slaughtered five percent or more of the number of fed cattle nationally.

*The bill also includes provisions to create a publicly available library of marketing contracts, mandating box beef reporting to ensure transparency, expediting the reporting of cattle carcass weights, and requiring a packer to report the number of cattle scheduled to be delivered for slaughter each day for the next 14 days. The contract library would be permanently authorized and specify key details about the contents that must be included in the library like the duration of the contract and provisions in the contract that may impact price such as schedules, premiums and discounts, and transportation arrangements.

It’s less clear whether the special investigator measure, which only has six Republicans and six Democrats as co-sponsors, (among them Mike Rounds and John Thune (R-SD) has the votes to pass the upper chamber. The Meat and Poultry Special Investigator Act was previously advanced by the full House as part of the Lower Food and Fuel Costs package that advanced the week prior. The markup could be a telling indicator of its prospects on the Senate floor.

The price discovery and meat investigator bills are the most significant livestock reforms to advance in Congress this session.

Refresher:
*The Cattle Price Discovery and Transparency Act seeks to split the country into five to seven sectors and mandate a minimum level of cattle purchases through approved pricing mechanisms, mainly in the cash trade market, as well as create a nationwide cattle contract library. It seeks to ensure transparency in cattle pricing and cut down on contract sales that proponents say squeeze farmers.

*The Meat and Poultry Special Investigator Act would create a new office in the USDA to investigate complaints of anticompetitive behavior in the livestock industry under the 1921 Packers and Stockyards Act.