CAMP RAPID, SD –  Civil Air Patrol members from across the country will be in Rapid City July 10-18 for the 2021 Joint Dakota Encampment. Hosted by the North Dakota and South Dakota CAP Wings at Camp Rapid, nearly 175 staff and students will come from all eight CAP regions and 16 states. 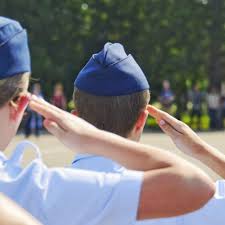 “Encampments are #1 activity, in terms of participation, for the CAP youth program, known as the Cadet Program,” said Capt. Richard Rezac, 2021 encampment commander. “The purpose of the cadet encampment is for cadets to develop leadership skills, investigate the aerospace sciences and related careers, commit to a habit of regular exercise, and solidify their moral character. It is the capstone of the Civil Air Patrol Cadet Program.”

CAP wings in many states have been forced to cancel their encampments due to the COVID-19 precautions, said Rezac. South Dakota’s more favorable COVID situation has attracted encampment participants from across the country, making the encampment more than twice it’s usual size.

Activities for the close to 120 youth members include classroom sessions on Civil Air Patrol and U.S. Air Force topics, aerospace education, leadership and physical fitness. In addition, cadets will train in drill and ceremonies, and compete in nightly sports competitions.

All of the cadets will visit Ellsworth Air Force Base and the South Dakota Air and Space Museum, including demonstrations and tours from some of Air Force active-duty units on base. They will also go through the Leadership Reaction Course at Camp Rapid West. Rezac noted that the cadets wear Air Force-style uniforms and passersby might see them in formation or marching with guidons.

Cadets will be introduced to military firearms at Camp Rapid’s Weapons Simulator Range. Cadets who are participating in the Advanced Leadership Course encampment track will go through a National Rifle Association (NRA) qualification course, to earn their NRA badge. They will also have the opportunity to earn their Model Rocketry badge.

Over 30 adult CAP members, known as Senior Members, will serve as staff for the encampment.  Their roles include supervising the cadets and managing the cadet activities, as well multiple record-keeping and administrative functions.