ROY, MT – Like almost every other ranch in Eastern Montana, Buck and JoAnn Mosby, and Buck’s mother Sharon Davis of Roy, Montana suffered from drought, grasshoppers, and hay shortages this summer.  They sold many of their cows, but still needed hay to get through the winter ahead.

JoAnn finally located two semi-loads of Sudangrass round bales for $140/Ton, but it was 750 miles away in the southeast corner of South Dakota, at Canistota, only 30 miles from Sioux Falls.  Their trucker friend Jaxon Allen of Wild Wild West Inc. in Lewistown estimated the freight expense to haul those bales to Montana would be $170/Ton, which would more than double the cost.  He recommended that the Mosby’s look elsewhere. 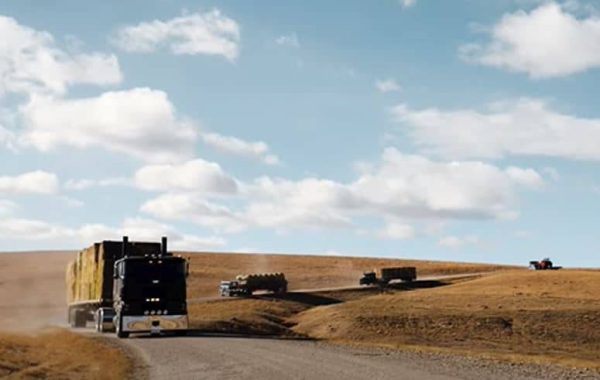 However, after thinking about it, Jaxon and another central Montana trucker, Cody Deupree of Hobson decided to help their friends, by donating their fuel and their time to drive to South Dakota and haul the two loads of hay back to Roy, Montana…for free.

Then Jaxon Allen got even more creative.  He reached out to a friend and video media star of the diesel industry named Dave Sparks, owner of Sparks Motors just north of Salt Lake City, better known as “Heavy D” on the Discovery Channel show “Diesel Brothers”.  Sparks and his co-host Dave Kiley “Diesel Dave” threw their celebrity weight behind the task, to find hay that they could deliver to help. They found some in eastern Idaho.

From Aberdeen, Idaho, T.J. Phillips of Pedal to the Metal Trucking located some good Alfalfa/Timothy hay in 3×4 and 4×4 big square bales, for $190/Ton.  When hay owner Steve Worthing heard that Heavy D was donating the 450 miles of trucking cost for that hay, then Worthing agreed to donate one semi-load of the hay for no cost.  T.J. and Heavy D paid for the rest, and suddenly two more semi-loads of hay were headed to Roy.

Unbeknownst to the Mosby family, “Heavy D” also paid for the cost of the Sudangrass hay coming from South Dakota, so now four semi-trailers of free hay were headed for Montana.

The convoy met in Lewistown, and on Tuesday morning November 16th, headed for the Davis Ranch five miles southeast of Roy, in the shadows of Black Butte.

When the hay was unloaded, and everyone went to Sharon Davis’ kitchen to settle up, that’s when the truckers informed the family that there would be no charge for the four semi-loads of hay. Buck and JoAnn Mosby were speechless.  Later JoAnn exclaimed, “We’ve always tried to raise our kids to want to help others, and ‘pay it forward’; but this was an amazing act of generosity, with so many total strangers involved!”

Many ag producers, in multiple western states, have suffered nature’s hardship this year.  But stories like this, and the example set by these truckers, restores one’s faith in the generosity of the human spirit.