SIOUX FALLS, SD  – Following protests over new social studies curriculum recommendations that advocates say does not fully include Idigenous history and cultural issues, the South Dakota Board of Education announced a change in plans for its first public meeting regarding standards content. 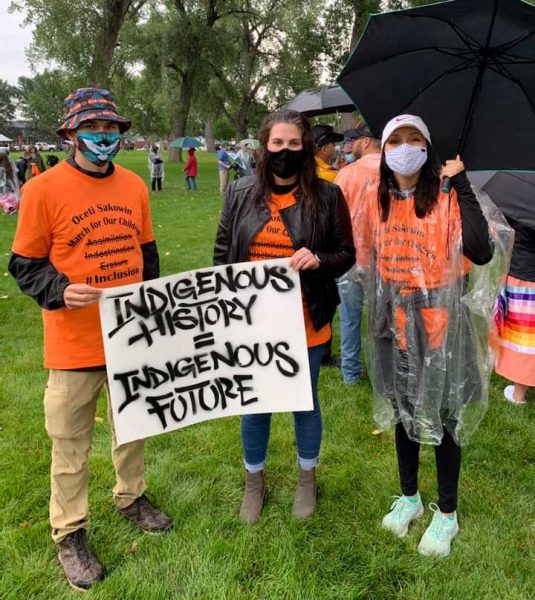 4Rosebud leaders joined the protest over the removal of native american history by the South Dakota Board of Education Standards Committee. (Photo NDN Collective)

The next public meeting has been postponed to October 25th after being moved to the Pierre. On Monday, there were protests in Pierre over the new social studies curriculum recommendations. The public meeting was supposed to take place at Holgate Middle School in Aberdeen on September 20th. But after more than 200 people gathered to protest the new standards recommendaitons, the meeting has been moved to a larger venue, the Pierre Convention Center

The move to a different venue required the date to be rescheduled due to the state statute that requires public notice of meetings to be given 30 days in advance. The public meeting is now set for October 25.

According to Secretary of Education Tiffany Sanderson, she expects that a process involving the Board of Education, educators and pubic input will result in student curriculum that, “reflects South Dakota values.”

State law requires four public hearings on any proposed changes to content standards. In addition to the rescheduled Oct. 25 hearing in Aberdeen, a hearing is scheduled for Nov. 15 in Sioux Falls. At the October meeting, the board will set dates for the remaining hearings to be held in Rapid City and Pierre in 2022.