SIOUX FALLS, SD – Rural ambulance services in South Dakota are having an increasingly hard time recruiting volunteers and generating revenues, putting the stability of the services at risk and making it more likely that rural residents will endure longer response times in emergencies or possibly lose ambulance service altogether.

While most larger cities in South Dakota have professional ambulance services or fire departments with paid staff members, rural services rely mostly on volunteers. In recent years, those rural providers have seen fewer people willing to volunteer and those who do volunteer are older residents who are aging out of the workforce. 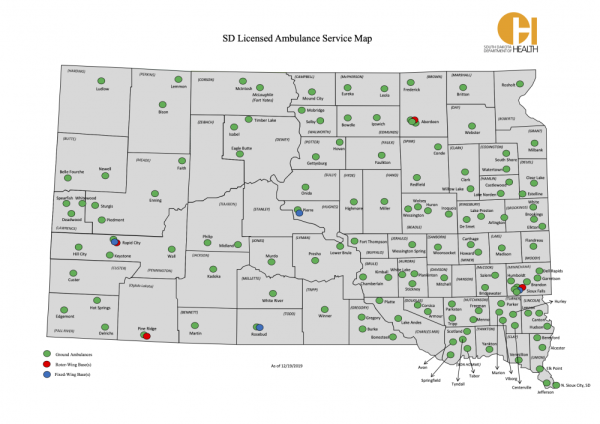 This map from the South Dakota Department of Health shows the location of ambulance services across the state and reveals how some rural areas — especially in West River regions — have limited access to emergency transportation services.

About a third of rural ambulance directors in South Dakota said they couldn’t respond to a call because of staffing shortages, according to a 2016 survey. Roughly a third more said response times were delayed due to lack of staffing.

Paying the bills is also a growing challenge for ambulance services, which see limited patient billings and high levels of non-payment write-offs. Patient billing is the main funding source, and it usually does not cover the costs of responding to an emergency or transporting a patient, let alone covering overhead for the service.

Rural ambulance services sometimes do not see the call volume needed to cover costs such as equipment, insurance, training or staff. Budgets are often supplemented by millions of dollars a year in volunteer labor.

Ninety-five of South Dakota’s 126 ambulance services are staffed with at least some volunteer labor, according to a state-funded survey from SafeTech Solutions. The majority of rural ambulance directors said they think they can function financially for the next decade, but just one third were confident they would be able to fully staff a 24/7 service in the future, according to the survey.

To run a 24/7 ambulance service in South Dakota, a provider needs at least 14 workers, yet almost half of the state’s volunteer ambulance services reported having fewer than 10 people on the roster, according to the survey.

The COVID-19 pandemic reduced the dwindling volunteer pool even further. The active EMS workforce decreased by almost 30% in the last year because volunteers worried about contracting the virus, according to the South Dakota Department of Health.

Ambulance volunteers and directors said the decline in volunteerism has been a concern for years. Younger people are moving into more urban areas or don’t want to volunteer for a medical job they think should be a paid position.

“The major concern is that an ambulance will be needed and no one is available, and we will see an increase in morbidity and mortality,” said John Becknell, an analyst for SafeTech Solutions, a consulting firm that studies and provides guidance to emergency medical services. 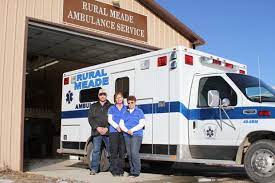 Staffing shortages caused a volunteer ambulance service in rural Meade County to shut down last year, suddenly putting residents of the area an hour of travel time from any ambulance coverage.

The Rural Meade County Ambulance Service in Enning, about 50 miles east of Sturgis, closed in April 2020. The service responded to about 30 calls each year, and volunteers from Enning also assisted other agencies and transported patients in major emergencies.

After the closure, ambulances services in Faith and Newell agreed to cover most of the more than 1,200 square miles previously serviced by the Rural Meade County Ambulance Service. In extreme emergencies, air ambulances can respond to calls in the small swath still considered uncovered by the other ground ambulances.

In a subsequent election, Meade County voters approved a new ambulance tax district last year. Households in the county outside of Sturgis will contribute about $75 a year for the service, and county commissioners agreed to give the Rural Meade County Ambulance $5,000 to re-open. About 10 people are taking the 180-hour class required to become emergency medical technicians. County leaders hope these efforts bring back the service.

“What’s happened in central Meade County is going to be replicated statewide,” said Jerry Derr, assistant for the Meade County Commission.  “Tying to get younger people in the community and pick up that mantle, you’re just not getting in the rural areas.”

Kathy Chesney and her crew in Philip recently drove 47 miles north of their station to help a patient too weak to get out of his house. While the ambulance team was there, that patient went into cardiac arrest and was saved by the responding EMTs.

The Philip Ambulance Service, located in sparsely populated Haakon County, was the closest to the rancher’s home.

“If we hadn’t been there, he would not have survived,” said Chesney, 55.

The Philip Ambulance Service responds to about 230 calls each year in its service area that covers more than 1,200 square miles. About 15 volunteers are on the roster, but only three people are typically available to take calls during the day, said Chesney, who has been a paramedic in the area for 24 years.

The long service distances and response times are more common in West River regions. East River services can sometimes be found 10 miles apart, while services in the western side of the state may cover portions of multiple counties and be located many miles from one another.

Nationally, rural ambulance systems are critical to the 60 million people who live in rural America and some services are on the verge of collapse, according to a January report from the Rural Policy Research Institute.

Emergencies such as skiing accidents or hiker injuries that require crews to ride snowmobiles or hike to an injured person can easily push response times to an hour, said Brian Hambek, director of the Spearfish Emergency Ambulance Service.

The majority of EMS patients are on Medicaid and Medicare, which doesn’t reimburse the full cost of providing transport. Private insurance sometimes pays the patient rather than the ambulance service, and those patients sometimes do not pay their ambulance bills, Hambek said.

Ambulance services need about 650 calls each year to stay out of debt, according to the health department. More than 80% of ambulances in South Dakota do not have enough billable patients to cover all of their expenses, Hambek said.

The rural population is declining and aging, and a new generation of potential volunteers doesn’t want to work in a healthcare and public safety service that can’t always pay its workers, said Becknell of SafeTech Solutions.

“Young people see law enforcement is paid, snow-plowing is paid, garbage is paid, why should transferring a patient from a local hospital be volunteer?” he said. “We’re expecting more out of them, more accountability out of them in terms of reliability and education.”

Nicole Neugebauer, 48, director of the Douglas County Ambulance Service, said not enough people are interested in taking the class to volunteer.

“Locally we are down EMTs,” Neugebauer said. “We can’t find people who want to take the classes. It’s a lot of work, but you have to have the skills to save a life.”

Rachael Gartner, a 30-year-old mother, banker, church volunteer and community band member, notices the strain on the half dozen or so EMTs who regularly handle calls in and around Philip.

Gartner has been an EMT for only about five months, and she’s already learned there is more to the job than what’s often shown on television.

“It’s not all about trauma,” she said. “Right now we have five or six people who take calls. They’ve got to be getting burned out.”

The South Dakota health department is working on an EMS Agenda for 2040, which would include “strategic plans for the future,” said spokesman Daniel Bucheli.

CORRECTION: The ambulance service in Wall, South Dakota did not provide emergency service in the Enning area when the Rural Meade County Ambulance Service in Enning closed in 2020. That fact was reported incorrectly in a recent story by South Dakota News Watch.