UNDATED – Backers of a multibillion-dollar proposal in rural south-central South Dakota say they have a way to capture and store renewable energy for later use.

The clean energy pitch has drawn criticism and concern from nearby landowners, however, who worry that the project could damage the environment and impact recreational opportunities in south-central South Dakota.

Project managers want to build a massive new reservoir above the western bluffs of the Missouri River, about 20 miles northeast of Gregory.

When the demand for electricity is low, the project would capitalize on renewable energy sources like wind and solar to pump water from the river up into the proposed 40-billion-gallon reservoir.

When demand is high, the water would flow back down toward the river, where it would eventually run through a new hydro plant near Fort Randall Dam to generate electricity.

The system would work like a battery to store wind and solar power as water, and then convert it back into electricity. The electricity would be transmitted to the electric grid and distribute by Southwest Power Pool (SPP) and the Midcontinent Independent System Operator (MISO).

“There’s a lot of wind energy being built in our region, which is great. That is renewable, clean energy,” said project spokesperson Joni Livingston. “But the thing is, it is not available all the time.” 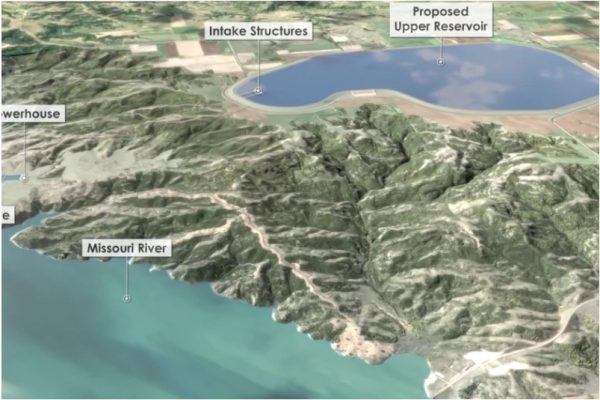 A render of the proposed pumped storage projec.t Courtesy MRES and MidAmerican Energy

The Gregory County Pumped Storage Project has  been discussed since at least 1976. It has new momentum now, because the state produces double the electricity it consumes. The project would be funded by MidAmerican Energy and Missouri River Energy Services (MRES). The energy providers still need approval from the federal government.

It would take more electricity to pump water up to the proposed reservoir than the water would generate as it flows back to the river, turning a turbine. But as the upper reservoir drains, the maximum output is projected at 2,100 megawatts – about equal to all the power produced by South Dakota’s hydroelectric dams – for 46 hours. That is possible because while dams are limited to the flow rate of the river it’s built on, this project can discharge out of the upper reservoir multiple times that, said spokesperson Joni Livingston.

But before the project can happen, it needs about 4 square miles of land, which is privately owned.

A hydro battery is an unwelcome addition to David and Fawn Swift.

The couple would lose about 320 acres of land to the proposed reservoir.

“We first got word of it through a letter in early spring, late winter,” David Swift said. “We could quickly see, as landowners, that there were going to be a lot of us that were going to lose a significant amount of land. And so we started the fight.”

The Swifts have helped organize others against the project. The group has decided its best bet is to stop the federal government from licensing the project.

The company plans to complete the licensing in 2026. It is conducting impact studies until then, said spokesperson Joni Livingston.

“There’s no way people will agree to sell their land,” Qualm said. “I’ve got friends, I’ve got relatives that have land involved in this, and they’re not interested.”

There is historical precedent for land seizures up and down the river. Thousands of Native Americans were displaced from their homes along the bottomlands when the dams were constructed along the Missouri between 1933 and 1964.

Any South Dakotan who supports the pumped-storage project is naive about what’s to come, Qualm said.

Project spokesperson Joni Livingston said MRES and MidAmerican Energy are doing everything they can to address stakeholder concerns, and representatives are meeting with landowner groups.

“We completely understand their perspective and are very sympathetic to that,” Livingston said.

Sediment disruption and its ripple effects are concerns for Scott Pick, the general manager for the Randall Community Water District.

Pick said sediment would be kicked up from the river bottom as the pump brings water into the upper reservoir and runs it back into the river. The suspended sediment would require costly filtration for the drinking water intake pipes near the project, he said

“How long will it take before sedimentation overruns our $16 million intake that I just put in?” Pick said. “What happens then when we can’t serve the water as a result of this project? And who’s gonna pay for the intake?”

Pick said 25,000 people in the area depend on river intakes for their water. The system he manages pumps about 1.3 billion gallons to Charles Mix and Douglas counties, and two other rural water systems.

“The environmental aspect of what it’s going to do to the river, the fishing, the recreation, I don’t think there’s any doubt that it’s going to be of a magnitude that most people can’t even realize,” Qualm said.

The impacts to the river will be less than critics fear, according to Terry Wolf, vice president of power supply and operations for Missouri River Energy Services.

The initial setup released water into Lake Francis Case at a slow rate of 2 feet per second, which he doesn’t think will increase the turbidity.

“However,” Wolf said, “detailed studies will be done to confirm or dispel our initial assessment.”

The Federal Energy Regulatory Commission is keenly aware of water quality, Wolf said, and is sensitive to ensuring that the flows from the project don’t have a negative impact.

“If the studies demonstrate that the project will negatively affect water quality, we will work with the rural water providers to mitigate any impacts,” Wolf said.

University of South Dakota Professor Mark Sweeney studies sediment transport in the Missouri River. Even if there is an increase in turbidity, it would be unlikely to hurt the ecosystem, he said.

Sweeney points to the White River, which carries large amounts of sediment into the Missouri River with minimal impact to fishing.

Joni Livingston said MRES and MidAmerican Energy are aware of that study, and said the project is bringing tribal leaders to the table for advice and insights.

There’s more to be gained from than a giant battery not reliant on precious metals like lithium, according to Livingston. Property tax revenue and sales tax revenue on a project of this size would be significant.

“We’re looking to build this project in a range of $5 to 10 billion,” Livingston said. “Those numbers aren’t fine-tuned yet.”

Livingston said the project is a safe investment for the energy providers because the project is projected to generate electricity for 80 to 100 yrs.

Livingston also points to new jobs: 15 permanent positions and over 1,000 during construction. That means demand for local materials for tradespeople.

Livingston invites feedback from anyone impacted by what she described as a needed project.

“We already serve three of those communities. They are our customers. We want to listen to them,” Livingston said”

October 26 was the last day to submit study requests.

MRES and MidAmerican Energy are reviewing comments submitted during meetings and adjusting their study plan to address those comments.