RAPID CITY, S.D. – Retired U.S. Navy Capt. E. Royce Williams from Wilmot, S.D. earned the Silver Star for his service in the Korean War, including 70 combat missions. But there was something always missing.

Seventy-one years ago, Williams survived what is perhaps the longest aerial dogfight in U.S. military history. He would face seven Soviet MiG-15 fighter jets during one 35-minute battle. After the engagement, military leaders were concerned the incident might mark a devastating increase of tensions between the U.S. and Soviet Union. Williams was ordered to keep silent about the events of November 18, 1952.

In November 1952, then-Lt. Williams led three F9F Panthers in a ground support mission over North Korea, near the Soviet Union border. While the other Panthers were returning to the carrier USS Oriskany, Williams’ Panther was jumped by seven Soviet Union MIG 15s, which outclassed the Panther in every aspect.

Despite being outnumbered and outclassed, Williams was able to shoot down four MIGs. His Panther was so badly damaged that when Williams landed on the carrier, the plane was dumped overboard. But Williams was unscathed. 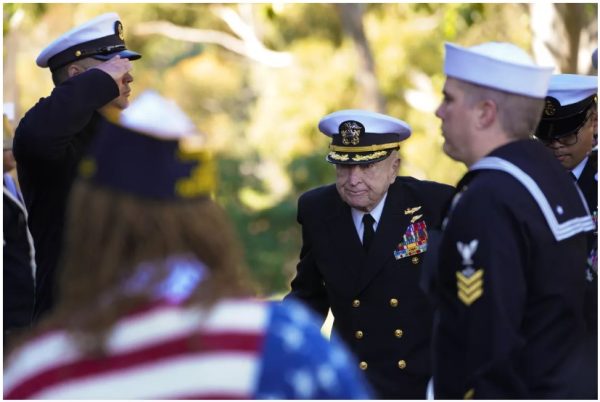 “This whole thing lasted 30, 35 minutes,” Williams said in a Navy documentary (watch the video below). “There was somebody shooting at me the whole time. So, I’m on the defensive. I’m not really declaring war on them. I’m trying to keep in the fight.”

His heroics were highly classified at the time since the U.S. was not actually at war with the Soviet Union. It wasn’t until 2016 when the military declassified the combat.

Since then, there was a campaign that included South Dakota Sen. Mike Rounds to upgrade Williams’ Silver Star to the Navy Cross. Finally, Friday, Jan. 20, Williams was presented the Navy Cross.

“Royce is a true American hero, and I am pleased he is finally receiving the Navy Cross,” said Rounds. “As the second-highest military decoration for sailors and marines, it is truly reserved for those who displayed extraordinary heroism in combat with armed enemy forces. His distinguished actions over 70 years ago is a story for the ages. I can’t think of anyone more deserving of this award than Royce, and I am grateful for his service to our nation.

In a 2020 interview with Steve Zwemke with South Dakota Public Broadcasting, Williams said he didn’t know how good he had it, being raised in rural South Dakota. He grew up in Roberts County, Wilmot to be exact. His father was a grocer and a veteran of the first World War. He yearned to be like his father.

Later in life, he developed a much greater appreciation for his upbringing and for life in northeastern South Dakota.

“I didn’t realize the fortunate life I had. The openness … everybody friendly – looking after one another … go out and learn to swim, learn to shoot. We used to play a lot of cowboy and Indian games and run around all over as long as you came back before the lights came on in the summer before dinner. It was wonderful.”

While thumbing through photos at the San Diego Air and Space Museum, Williams stops on a picture of him as a young boy and fondly tells of one of his very first talents.

“Well I have chaps and kind of a cowboy outfit. I was very interested in being a cowboy at one point. We had Whipple Ranch quite nearby. They were famous for putting on rodeos and county fairs throughout North Dakota, South Dakota and Minnesota. And I had a cousin that worked at the ranch. But, I got pretty good with the lasso and I’d lasso kids in the summer. And my oldest son – I taught him too – and by age eight he’d have kids running by and give ‘em rope burn…hahaha!”

Williams brought that cowboy spirit into his career with the U.S. Navy which began in 1943.

Retired Navy Capt. E. Royce Williams recounts the story of his dogfight with seven Soviet MiG fighters in 1952 during the Korean War, which he was ordered to never tell anyone for more than 50 years after the event. (U.S. Navy video by Austin Rooney/released)

During the Korean War Williams noticed that reserve pilots were being called into duty. He was determined to serve his country. Williams was qualified on Corsairs, but he had his heart set on flying the F9F Panther jet. He made a call to the commanding officer of the Panther squadron who just happened to be the executive officer of the ROTC unit at the University of Minnesota – his alma mater. His orders were changed the next day.

Over a 37-year stint in the U.S. Navy, Williams got the opportunity to fly several different types of fighter aircraft. However, Williams still feels deeply connected to the Grumman F9F Panther, a carrier-based fighter — because that’s the airplane he was flying when the unexpected happened over the Sea of Japan over 70 years ago. The Panther saved Williams’ life.

“I actually have some models and pictures around my house. I have an affection for it because I went through some severe times with it and it was like a well-heeled horse. It got me through. Grumman made a great dependable product and where it was great at delivering weaponry it was also very good at surviving.”