RAPID CITY, SD – The western side of Pennington County doesn’t have enough water to last through an extended drought, according to a 2019 study by the South Dakota School of Mines.

The region, which includes Rapid City, relies on ground and surface water to supply its city populations, commercial districts and agricultural needs. But given the increase in population and water use, Pennington County and the majority of western South Dakota will soon need another source.

One possible solution? Piping water from the Missouri River to supply 29,710 square miles of western South Dakota, an area roughly the size of West Virginia and Connecticut combined. Specifically, the pipeline would carry water to all western South Dakota counties except Harding, Corson, Dewey, Ziebach, Tripp and Gregory.

Such a pipeline can cost up to $2 billion and likely take decades to accomplish, much like the Lewis and Clark Regional Water System in southeastern South Dakota. Lewis and Clark pipes water from the Missouri River to the Sioux Falls area and into southwestern Minnesota already. It will eventually pump water farther north in South Dakota and connect to communities in northwestern Iowa once completed. The project will benefit about 300,000 people and expand economic development opportunities for the region.

Given that western Pennington County has already exceeded its “dry budget,” leaders hope to speed up the West River project to improve the state’s drought resilience.

Project ‘in its infant stage’

Price estimates for the western South Dakota pipeline range from around $500 million to just under $1.9 billion, depending on pipeline capacity and based on early estimates from the School of Mines, said Cheryl Chapman, executive director of the West Dakota Regional Water System (WDRWS), which is spearheading the pipeline project.

“We want to make sure no part of our state goes without the water resources it needs, especially if, as a region, western South Dakota falls into a drought,” Chapman said. “It’s good planning for the future, and it’s a good contribution for the health and wellness of our state.” 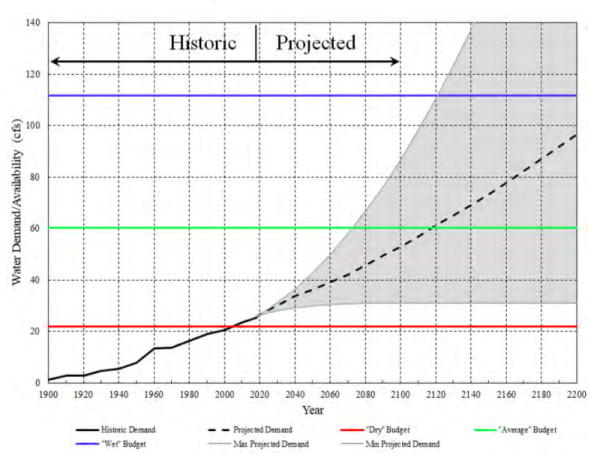 It will be years before the pipeline is built. The WDRWS is just a year old and the pipeline project is in its “infancy stage.”

The nonprofit has received some funding for studies so far, including an $8 million grant from the American Rescue Plan Act (ARPA). The South Dakota Legislature and Board of Water and Natural Resources awarded the ARPA funds in April for preliminary studies and engineering reports.

“When we talk about feasibility study, it ends up being a fairly detailed study of all the aspects of this project – not just where to line a pipe,” Chapman said. “We want to really understand what our challenges are. Are there parts of western South Dakota that are more vulnerable than others? How does that look from a science perspective to make sure we fully understand what needs to happen under certain conditions of drought?”

The State Water Resources Management System (SWRMS) could put another $1 million toward the project if passed by the Legislature. To earn that money, the WDRWS pipeline project must raise $250,000, after which the SWRMS fund will match $4 to every $1 raised. So far they have raised $183,500, including a $100,000 contribution Rapid City councilors passed this week.

Rapid City will be the largest contributor for the SWRMS match, said Dale Tech, Rapid City director of public works and president of WDRWS.

“As we continue to grow, the city of Rapid City will likely use more water than anybody else,” Tech said. “That’s why the funding request is high. The city currently has a future use permit anyway, and this is an investment in developing their future use permit into actual water.”

No matter what, the project will not be constructed without a “very large federal influx of money,” Tech added.

While WDRWS formed a year ago, the project has been in the minds of western South Dakotans since the 1970s.

The Black Hills Conservancy subdistrict, made up of four Black HIlls counties, received a future use permit for the project in the 1970s. The permit transferred hands over the years until the West Dakota Water Development District contracted the School of Mines study, checking to see if the permit was worth another renewal.

“That report came back and said, ‘yes, you very much should renew the permit and you should get busy on actually building something,” Chapman said. “The need for redundancy in water systems, in some cases better quality water, is very critical, especially if the region were to experience prolonged drought.”

The water piped from the Missouri River will supply much of western South Dakota. Tech said it shouldn’t make a difference for water levels in the river.

“Based on just the future use permits that exist, it’s a very minor portion of the Missouri River water,” Tech said. “The needs of western South Dakota won’t mean a significant reduction in noticeable water in the river.”

Water will likely have to be treated, Tech said, but that will be determined for sure through the engineering studies.

“I think with water issues in other parts of the county, especially headlines in the Southwest …, are making people very aware of what the consequences can be if you’re in a drought and what that means for water supplies,” Chapman said. “People are very interested and they’re glad that groups like ours are looking at ways to protect our water supplies for years to come.”